GDI stands for Gasoline Direct Injection, but that’s not all. To BG, it stands for opportunity.
Gasoline direct injection engines are nothing new. The first automotive GDI engine was introduced in Germany in the 50s. The GDI engine boasts more power with increased fuel economy. At the time, fuel and oil were cheap and the need for fuel-saving engines wasn’t significant. Manufacturers didn’t aggressively pursue GDI engines until the early 2000s.
Today, CAFE regulations put a lot of pressure on manufacturers to revolutionize vehicles and meet stringent fuel economy and emissions requirements. As a result, many manufacturers are turning to GDI, coupled with other engine technologies such as turbocharging, to produce a vehicle with small-engine efficiency and big-engine power.

GDI is the answer for OEMs!
GDI engines offer increased fuel economy, power and performance, all while reducing emissions. They are significantly more efficient than port fuel injection (PFI) engines.
For example, in a GDI engine, gasoline is sprayed directly where the combustion chamber is the hottest (instead of in the air intake), allowing for a more thorough, even burn. Ideally, this more complete combustion translates to better mileage and greater power. GDI engines burn leaner than port fuel injection engines (GDI 40:1 vs. PFI 14.7:1). A leaner mixture allows fuel to be burned much more conservatively. GDIs have accurately controlled emissions levels, more aggressive ignition timing curves, and more precise control over fuel and injection timing. 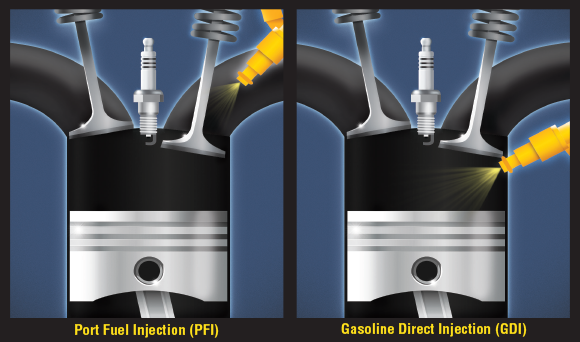 Too good to be true
As the saying goes, “If it sounds too good to be true, it probably is.” And the same goes for GDI engines. As with most complex technologies, with the benefits, complications may occur.
New vehicles with GDI engines have seen significant performance and mpg losses, ignition failures and fouled injectors in as early as 3,000 miles (4,800 km) and, potentially, holes from carbon burned in the structure of the catalytic converter in as early as 50,000 miles (80,000 km)!
What’s causing all these GDI engines to have complications so soon?

Poor air quality
In most environments, intake air is dirty due to pollution, and with modern exhaust gas recirculation systems and crankcase vent systems—and without port injectors spraying gasoline (and the detergents that it contains) onto the valves—GDI components can get filthy over the course of many thousand miles.

Extreme pressure
GDI engines run at much higher cylinder pressures, which in time, can pass by the piston sealing rings. The heat and pressure released into the crankcase accelerates oil vaporization and eventually distributes oil droplets onto the intake valves. Thus, intake valves collect deposits and in as little as 10,000 miles (16,000 km), they can bake on and cause a decrease in power and poor drivability. Since inception, GDI engines have had known problems with coking—buildup of cooked fuel deposits that foul injectors.

Oil evaporation
The high operating temperatures of GDI engines can lead to engine oil evaporation. Oil vapors circulating in the cooler regions of the engine create deposits and pooling. Some of those areas include intake boots, valves, piston crown, head squish area and catalytic system.
In a port fuel injection engine, these droplets are “washed off” the intake valves by a constant stream of gasoline. However, a GDI engine does not have that advantage because the injectors spray inside the cylinders.

Deposits
Deposits are like a sticky coating of oil that forms especially on the intake ports and valves. Carbon buildup on the backsides of valves can result in reduced airflow.
A combination of sticky deposits and oil evaporation can lead to carbon buildup in several places in the engine. These sticky deposits can be cooked to diamond hard deposits and can dislodge and cause damage to turbochargers, catalytic converters, etc. These hard deposits can also cause irreversible cylinder scoring.

BG has the solution for complex technologies
With many complex technologies, BG has a simple, effective solution. Usually a pour product or a piece of equipment can keep the engine clean and deposit-free. GDI engines, however, have proven to be a little more challenging.
For example, in port fuel injection engines, the injector sprays fuel on the back of the valve. Thus, adding a fuel system cleaner to the fuel will clean deposits from the backs of valves. In GDI engines, however, because fuel is sprayed directly into the combustion chamber—and not onto the back of the valve—it’s very difficult to get the backs of the valves clean, without a lengthy teardown. That sounds like an opportunity to BG!
BG has a two-pronged approach to potential complications in GDI engines: the Clean Up and the Keep It Clean.
The Clean Up is for the GDI engines that have accumulated many thousands of miles and have the deposit buildup to prove it. While it’s in depth, it’s nothing compared to the complete teardown in which many service departments are elbow deep. 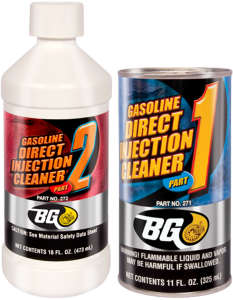 BG Gasoline Direct Injection Cleaner, PNs 271 and 272, is a two-part process formulated to quickly soften and disperse baked-on deposits, which accumulate on the intake valves of direct-injected engines. With the Gasoline Direct Injection Service Tools, PN 9060, the technician can remove harmful deposits without the complete disassembly that’s typically required.
Once the GDI engine has been cleaned up, it’s imperative to keep it clean to avoid continuous deposit buildup. The BEST way to clean these tough-to-remove deposits is to avoid them in the first place. The Keep It Clean approach packs a punch with three of BG’s most effective products. The BEST way to do that is with the BG GDI Performance Service at each oil change interval. 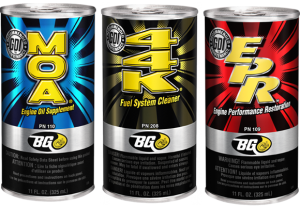 Together these three products have been proven to keep GDI engines clean and prevent potential complications. So when manufacturers turn to new, complex technologies like GDI for better fuel economy and lower emissions, BG knows that GDI stands for opportunity. And BG seizes that opportunity to make GDI engines last longer and perform even better so that drivers can enjoy the significant benefit of these highly complex engines.